The 5 “Stans” of Central Asia

Delve into one of the most legendary routes in the history, which enchanted people for several generations! This tour is an exclusive opportunity to have a specific overview of those countries’ culture and history, during our visits to them. Also, this journey includes visits to capitals and many cities with unique monuments and museums, as well as walks through breathtaking landscapes. Take the time to immerse yourself in the fascinating discovery of these picturesque sights. 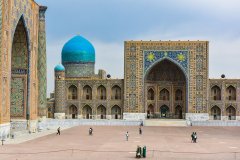 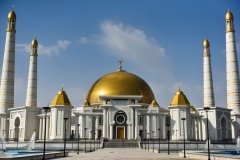 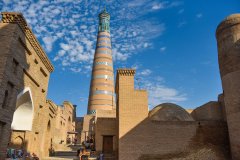 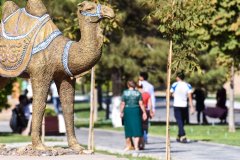 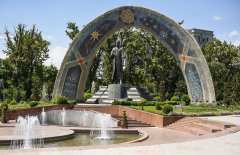 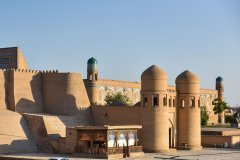 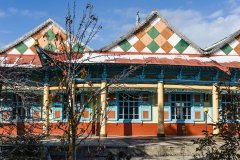 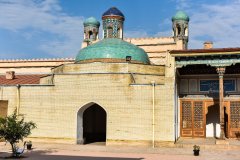 Day 2         Tashkent City Tour
At 09:00 meeting with the guide in the hotel’s lobby.
We will start our tour with a visit to lots of interesting sights in Tashkent City. Whereas, we will see the Hast-Imam Ensemble, the Barak-khan Madrasah, the Tillya Sheikh Mosque, the Abu Bakr Kaffal Shashi Mausoleum, the Imam Al-Bukhari Islamic Institute, the Chorsu Bazaar, the “Soviet” metro, the Amir Timur Square, the Independence Square and the Museum of Applied Arts.
Free time in the evening. Overnight at the hotel.

Day 3         Tashkent – Khujand (Tajikistan)
Early in the morning, we will depart to Tajikistan. Whereas, we will cross the border of Uzbekistan-Tajikistan through the Oybek passageway. After passing the customs, we will head to Khujand, one of the oldest cities of Central Asia (7th–6th centuries BC) and check-in at the hotel. Later, we will visit the Timur Malik Fortress, which is well-known for the liberation of Tajik people during the battle between the troops of Timur Malik and Genghis Khan. Afterwards, we will visit the Archaeological Museum, the Madrasah and Memorial of Sheikh Muslihiddin, the Oriental Payshanba Bazaar, as well as the Amir Ismail Samani Monument.
Dinner and overnight.

Day 4         Khujand – Dushanbe
The trip will continue to the Capital of Dushanbe. We will have a tour of the largest city in the country. Hence, we will visit the city center to see the Monument of Amir Ismail Samani - the founder of Samanid Empire. After, we will go to the Rudaki Park and Tajikistan’s famous National Museum of Antiquities, where the largest Buddha statue is exhibited.
Dinner at a local restaurant. Overnight at the hotel.

Day 5         Dushanbe – Gissar – Termez (Uzbekistan)
Today, we will head to Hisor City. Upon arrival, we will visit the city’s fortress, which was the former residence of Bek - the general governor of the country. Afterwards, we will move to Uzbekistan. Whereas, we will cross the border and pass the customs. Finally, we will depart to Termez, a city located in the southernmost part of the country.
Check-in at the hotel and leisure time.

Day 6         Termez City Tour
The day will be dedicated to the discovery of this historical city. We will start with a visit to the Kokildora Khanaka Mausoleum of the 16th century and the Kirk-Kiz Fortress, which was the summer residence of Samanid Emir. Afterwards, we will go to explore the Complex of Sultan Saodat, which includes seventeen mausoleums and the Monument of Stupa Zurmala. The trip will continue to Fayaz-Tepe Hill - the famous archaeological site for Buddhists, and the Mausoleum of Hakim al-Termezi.
Overnight at the hotel.

Day 7         Termez – Shakhrisabz – Samarkand
In the morning, we will depart from Termez to Samarkand through Shakhrisabz - the Timur’s hometown. All along the way, we will admire the watermelon fields and houses built of clay. In Shakhrisabz we will visit the Jakhongir and Omar Sheikh Mausoleum of the 15th century, the ruins of Ak-Saray Palace, the Dor-ut Tilovat Mausoleum, where Timur’s father was buried, as well as Kok Gumbaz Mosque of the 15th century.
Arrival in Samarkand, check-in at the hotel.

Day 8       Samarkand City Tour
The day will be dedicated to the discovery of Samarkand. First, we will stop at the spectacular Registan Square, which was the heart of the city surrounded by three madrasas. Then, we will visit the Bibi-Khanym Mosque, it was named in honour of Timur’s wife. Later, we will arrive at the 15th- century mathematician Ulugh Beg Observatory. In the evening, we will discover the Mausoleums of Shah-i-Zinda and Gur-e-Amir, dedicated to Sultan Muhammad, Timur’s grandson. These monuments are inscribed on UNESCO World Heritage List.
Overnight at the hotel.

Day 9       Samarkand – G’ijduvon – Bukhara
In the morning, we will take the direction to Bukhara. On the way, we will stop in Konigil Village in order to observe the traditional techniques of making mulberry paper. Later, we will arrive at the pottery Factory of G’ijduvon, which is the major reference in Central Asia for its ceramics.
Arrival in Bukhara, check-in at the hotel and leisure time.

Day 10       Bukhara City Tour
We will stroll in Bukhara with the local guide, mapping out several visits during the day: such as the Po-i-Kalon Architectural Ensemble, the Mir-i Arab Madrasah of the 17th century, the Magok-i-Attari Mosque, the Madrasahs of Ulugh Beg and Abdulaziz Khan. After, we will discover the ancient Ark Citadel of the Lyab-i Hauz Ensemble and the Chor Minor Madrasah of the 19th century.
Overnight at the hotel.

Day 11       Bukhara – Mary (Turkmenistan)
In the morning, we will leave Uzbekistan in order to go to Turkmenistan. Later, we will cross Uzbekistan-Turkmenistan border after passing the customs through Alat Farab.
Arrival in Mary, check-in at the hotel. Leisure time.

Day 12       Mary – Merv – Ashgabat
Before the flight to the Turkmenistan’s Capital, we will visit Merv, which is located in several kilometers away from Mary. It is included in the list of UNESCO World Heritage Site. We will explore the preserved urban centers and magnificent fortifications in Merv, dating back to the 3rd millennium BC. Afterwards, we will return to Mary and visit the regional museum and Russian Orthodox Church.
Transfer to the airport, flight to Ashgabat, check-in at the hotel and leisure time.

Day 13       Ashgabat City Tour
The day will start with a city tour to the Ashgabat Capital, which is well-known for its white marble buildings. We will discover the Presidential Square and newly constructed Independence Park. Later, we will visit the Neutrality Monument, as well as the National Museum of History and Ethnography, it was built after the adoption of independence. In the afternoon, we will go to explore the archaeological site of Old Nisa, inscribed on the list of UNESCO World Heritage Site. On the way, we will visit the memorial complex in Kipchak Village (Gypjak Village).
Return to Ashgabat. Overnight.

Day 14       Ashgabat – Dashoguz – Konye-Urgench – Khiva (Uzbekistan)
Transfer to the airport for the morning flight to Dashoguz. The road will take us to Konye-Urgench in order to discover the ancient capital of Khwarezmid Empire, as well as the Mausoleums of Turabeg Khanum, Sultan Tekesh, Najmuddin Kubra and Ali, which are classified among the best architectural constructions of this period. The last discovery of the day will be the Minaret of Kutlug Timur and Kyrk Molla. Later, we will take the direction to the Turkmenistan-Uzbekistan border. Transfer to Khiva.
Arrival in Khiva, check-in and overnight at the hotel.

Day 15       Khiva – Urgench – Tashkent
The day will start with a visit to the Itchan Kala Fortress, an open-air museum inscribed in the UNESCO World Heritage List. Here in Khiva City, there are 51 monumental structures, more than 250 houses and 16 madrasas. Whereas, we will visit the Kunya-Ark Castle, the Mausoleum of Allauddin Khan, the Muhammad Amin Khan Madrasah, the Ak Mosque (Ak-Masjid), the Khoja Berdibai Madrasah, the Shergazi Khan Madrasah, the Juma Mosque, the Tash-Khovli Palace, the Pakhlavan Mahmoud Mausoleum and the Minaret of Islam Khoja.
After a day full of adventures, we will transfer to the airport. Flight to Tashkent. Upon arrival, check-in at the hotel and leisure time.

Day 16       Tashkent – Kokand – Fergana
Early in the morning, we will depart to Fergana Valley, which is one of the most beautiful places in Uzbekistan. The steep road connects the Fergana Valley with the rest of Uzbekistan by crossing through the picturesque Kamchik Mountain Pass (2267 m above sea level). In the afternoon, we will arrive in Kokand in order to start a discovery of the Khudayar Khan Palace, the Jami Mosque, the Madrasas of Kamol-Kazi and Norbut-biy.
In the evening, we will arrive in Fergana and stop at the Park of Ahmad al Farghani. Check-in at the hotel and leisure time.

Day 17       Fergana – Osh (Kyrgyzstan)
Early in the morning, we will depart to Kyrgyzstan. We will cross the Uzbekistan-Kyrgyzstan border and take the direction of Osh City - the second largest city in the country and one of the most ancient ones in Central Asia. Here, we will have a tour of the city which was founded according to legend by King Solomon 3000 years ago. We will visit the Takht-e-Sulaiman Mountain, which is considered as the second Mecca for Muslims. Later, we will head to the National Museum of History and Archaeology, the Osh Bazaar - the commercial center situated on the Great Silk Road. Leisure time and overnight.

Day 18     Osh – Chychkan
In the morning, we will move to Chychkan Gorge, which is known for its extraordinarily diverse flora.
Leisure time. Overnight at the same place.

Day 19       Chychkan – Song Kol
The day will be devoted to the discovery of the Song Kol Lake. It is located at an altitude of more than 3000 m. We will stroll along the lakeshore, where the yurts are scattered.
Overnight in yurts.

Day 20       Song Kol – Karakol
We will have the chance to admire a splendid landscape throughout the day. On the route of our journey to Karakol, we will visit the workshop of Kyrgyz carpets, where we can attend the process of the carpets' production from the felt material. Also on our way, we will stop at the impressive Skazka Gorge (Fairy Tale) with its bizarre rocky shape, which transformed into monumental sculptures during the centuries. Before our arrival in Karakol, we will have an extraordinary trip to the picturesque Jeti-Oguz Gorge, well-known for its coniferous forest, the flower glades and the red sandstone formations.
Arrival in Karakol, check-in at the hotel and leisure time.

Day 21       Karakol – Cholpon-Ata
In the morning, after the tasty breakfast, we will discover Karakol. We will start from the Russian Orthodox Church and the Dungan Mosque, which was built without any nail in 1910. On the route of the tour to Bishkek, we will explore Cholpon-Ata, the magnificent petroglyphs of the archaeological site, located on the foothills of the Kungey Ala-Too Mountain.
Dinner and overnight in Bishkek.

Day 22       Cholpon-Ata – Sharyn Canyon – Almaty (Kazakhstan)
After the delicious breakfast, we will head to Kazakhstan while we will pass the Karkara border. Next, we will move to Sharyn Canyon, which often compares its beauty to the Grand Canyon of Colorado. As a result of the erosion, this canyon has its unique shape which will deeply impress and take us to the surreal world. The canyon stretches for about 154 km along the Sharyn River, which is an ideal place for rafting. Here, we can find rare plant species that survived from the Ice Age. Afterwards, we will have a tour to Almaty, the former capital and the main city of the country, situated on the South-East of Kazakhstan. All along the way, we will be enchanted by picturesque landscapes.
In the evening, we will arrive in Almaty. Check-in at the hotel and leisure time.

Day 23       AlmatyWe will finish our journey with a discovery of Almaty City, it is the old capital and the main south-eastern city of Kazakhstan. Hence, we will visit Panfilovets’ Park, the Ascension Orthodox Cathedral, the Green Market, the Republic Square, the National Museum and Kok-Tobe, which is the highest point in the city, from here, we will admire the fascinating view over Almaty.
Preparations for departure. Overnight at the hotel.

Day 24      Return flightTransfer to the airport. End of our services.