Etchmiadzin Cathedral is the main center of the Armenian Apostolic Church, as well as the seat of Catholicos of all Armenians. It’s among the unique and special places in Armenia. Being the oldest cathedral in the world, the historical monument is considered the most visited tourism destination in Armenia. 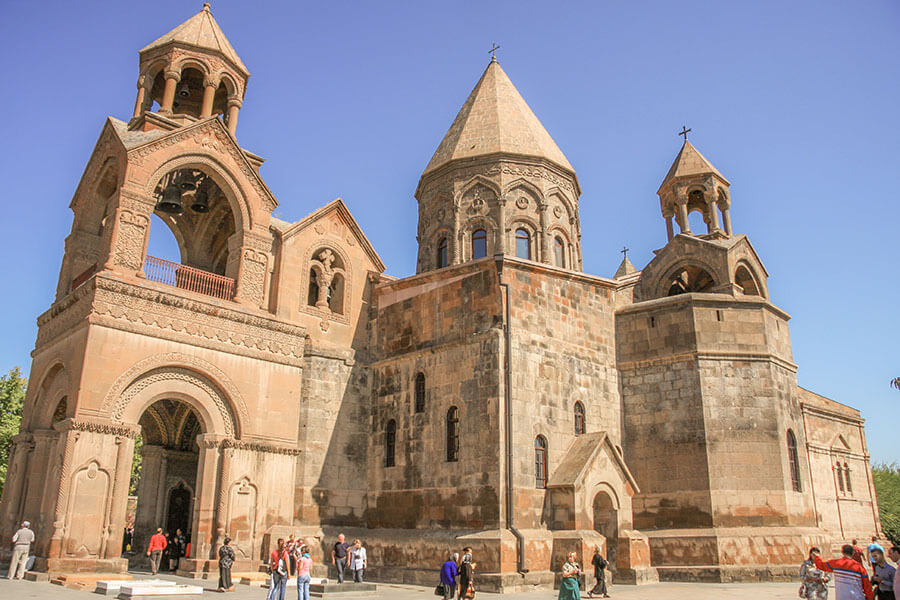 Travel to Echmiadzin City (renamed Vagharshapat) is an essential part of any tour to Armenia. This cathedral is the main shrine of the religious Christian Armenians worldwide. It is one of the symbols of Armenian identity. Moreover, as being the first church in the country, it has gained an important position in Armenia not only religiously, but also politically and culturally. Hence, this cathedral complex is famed for all Armenians as the “Armenian Vatican”.

The Mother Cathedral is located in Vagharshapat City, which was built from the ruins of the Urartian settlement in the 3rdcentury BC. In the second half of the 2ndcentury, this place was declared as the capital of the Kingdom. Only in the 4th century, after Christianity was adopted as the state religion (301), the city experienced fame and glory. Vagharshapat became the religious center of the land and the construction of the cathedral was undertaken.

St. Etchmiadzin Cathedral was built in 301-303 by the Armenian King Tridates III and St. Grigor Lusavorich (Gregory the Enlightener or Illuminator). According to Armenian historians, the first Armenian churches were founded in the places of the ancient pagan temples. Thus, the church replaced a pre-existing temple, symbolizing the conversion from paganism to Christianity.

According to the 5th-century Armenian historians, Saint Gregory the Illuminator had a vision of Jesus Christ, who descended from heaven and struck the earth with a golden hammer to show where the cathedral should be built. Hence, St. Gregory named the church” Etchmiadzin” which translates to “the Descent of the Only-Begotten”. However, the Armenian people continued to call Etchmiadzin “Cathedral of Vagarshapat” or simply “Katoghike” until the 15th century. Later the name” Etchmiadzin” has been used more frequently. Since 1945, the city was named Etchmiadzin, which the local people use until nowadays despite the fact that the official name of the city is Vagharshapat again.

During the centuries, the cathedral has been destroyed and rebuilt several times. The church complex consists of several infrastructures, such as the museums, residences, churches and educational institutions. Surely, any tour to Etchmiadzin will not be completed without visiting these places. Along with several important early medieval churches located nearby, this cathedral was listed as a UNESCO World Heritage Site in 2000.

In 2001, when Armenia celebrated the 1700th anniversary of adopting the Christianity, Pope John Paul II brought the relics of the first Armenian Catholicos there. For five hundred years, the relics of St. Gregory the Illuminator had been kept in Naples. Now the holy remains are in Echmiadzin Cathedral.

On Sundays and on Christian holidays, many people go to St. Etchmiadzin Cathedral to receive Holy Communion. Whereas, they get Lord’s bread, called “Nshkharh’’ in Armenian. Once every seven years, Holy Muron - the anointing oil is prepared from olive oil and extracts of more than 40 different kinds of flowers. The ceremony also includes the blessing of Holy Muron, which is used during baptism and priestly ordination. The preparation of Holy Muron is a part of the most important Christian holiday celebrations in Armenia.

Overall, a tour to Echmiadzin – the holy place and the major pilgrimage site is among the main points of any journey to Armenia for many compatriots.