If you plan to spend your holidays in Armenia, then a tour to Garni is a significant part of your journey. This astonishing site symbolizes pre-Christian Armenia and represents a world value. 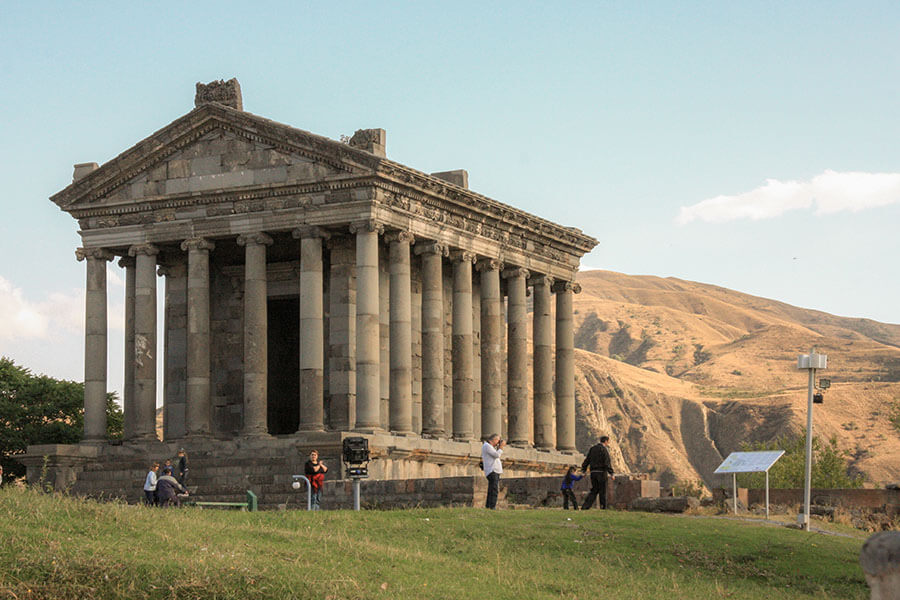 Any tour to Garni is an important opportunity to get acquainted with the unique monument of Hellenistic culture and architecture in the territory of Armenia. Being extended on the right bank of Azat River, in Kotayk Region, it is 28 km away from Yerevan - the capital of Armenia.

Garni is the only pagan temple in Armenia, which survived after adopting Christianity. It is a Greco-Roman colonnaded building from the first century AD, built by the King Tridates I in 77 AD. The construction of the temple is peripteral, the structure of which rising from a high pedestal. The 24 columns symbolize the hours of the day. The façade is luxuriously designed with the heads of lions exhibiting a variety of expressions. Moreover, the marvelous building is from basalt.

The temple is believed to have been dedicated to the God of Sun, Mithra – an Iranian goddess worshiped also in pre-Christian Armenia under the name of Mihr. That is why Garni is also referred as the Solar Temple. In Armenia, all pagan temples were called Mehyan - a derivative of Mihr.

According to the Armenian historian Movses Khorenaci, the temple was named in honor of Hayk Nahapet’s (Hayk Ancestor) grand-grandson of Gegham Garnik.

After recognizing Christianity as a state religion in Armenia in the 4th century, the temple was converted into a royal summer residence. It was destroyed by the earthquake in the 17th century but reconstructed in Soviet times in the 20th century.

The temple is settled in a nice spot at a perfect harmonization with the surrounding nature. Whereas, there is a picturesque view with a panorama of orchards, fields and slopes of mountains, as well as the gorge of the river from above.

While continuing a hiking in the territory of Garni, you will fulfill your curiosity, as there are more things to see in this area, like Garni Fortress, Garni Khatchkars (Cross Stones), the Summer Palace, the Royal Baths, among others. The latter has a mosaic floor made of 15-color natural stones. The mosaic presents various sea images and sea-connected phrases: deities, mermaids, fish-centaurs (a man with a body of a horse and a limb of a fish), a fisher, etc. The sculpture busts of men and women are illustrated in the center of the mosaic.

The whole area of Garni is characterized by natural volcanic rocks. The powerful basalt pillars, located in the gorge of Azat River, constitute the foundation of the Sun Temple. It’s worth to hike in the gorge and admire the vertical cliff walls all along the sides, well-known as the “Symphony of the Stones” and the 11th century medieval bridge.

At the end of Garni tour, continue the travel further to the southeast for about 7 km. Here, you can explore Geghard Monastery, which is listed as a UNESCO World Heritage Site. It is a marvelous monastery complex surrounded by the cliffs and mountain. As being situated partially in caves, Geghard Monastery is in full harmonization with nature.

In one word, those two heavenly places are the essential parts of any tour to Armenia.