Have you been to Almendres Cromlech in Portugal, Carnac in France or Stonehenge in England? Maybe the first two archaeoastronomical (ancient astronomy through stones) sites are not well-known. However, you have probably learned a lot about Stonehenge - the most popular and the major tourism destination, which attracts visitors from across the world. Thus, whenever you are planning a tour to Armenia, you should not miss a journey to the Armenian Stonehenge – Karahunj. 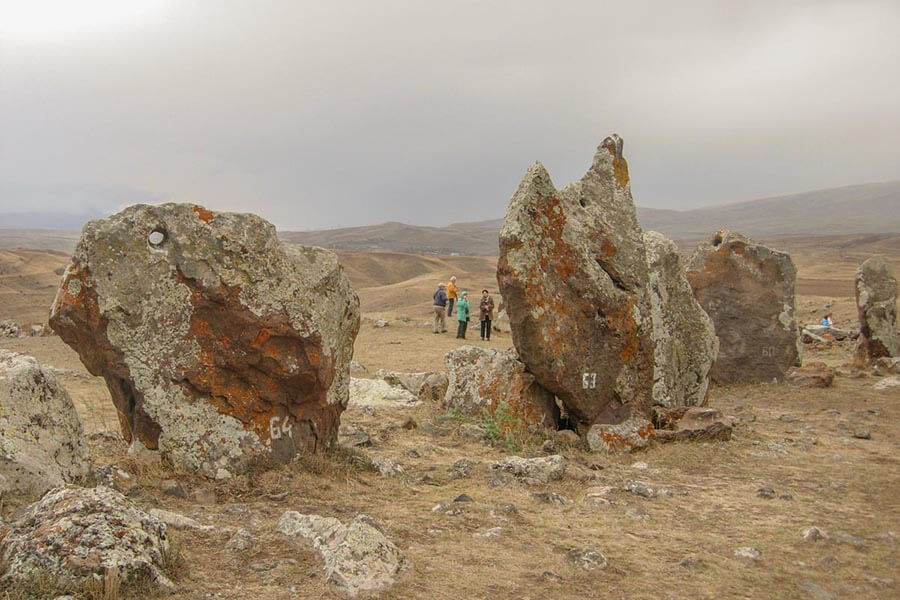 Megalithic Karahunj or Zorac Karer (Stones of strength) is located on a rough plateau at the deep canyon of Dar river (1,770 m above the sea level), near the city of Sisian, Syunik Region. There are total of 223 standing stones (area of 7 ha), of which 84 were found with containing holes. The tallest stones are up to 2.8 m tall, approximately 10 tons heavy.

The name “Karahunj” is deriving from two Armenian words which interpreted as “Kar” the stone, and “Hunj or Hunge” means sound. Thus, the name Karahunj means Speaking Stones. This interpretation is related to the fact that the stones make whistling sounds on a windy day. It is presumed to be caused by multiple holes that were made under different angles into the stones in prehistoric times. A series of stones standing in a line with holes pierced in them and rock paintings, which prove the astrological knowledge of the native people.

The first investigation in Karahunj started in 1984 by an archaeologist and later continued by an astrophysicist. The main findings are done by radio physicist Paris Heruni and his research team during 1994-2001. In 2004, the site was officially named the Karahunj Observatory. According to Herouni, as a result of the research, Karahunj appeared to be “the world’s oldest observatory”. This claim was later supported by an expedition made by Mihran Vardanyan from the Oxford University - Royal Geographical Society in 2010. M. Vardanyan concluded by saying that the site known as Karahunj was indeed “the oldest site for star gazing ever known to man”.

There are plenty of archeological landmarks with megalithic stones around the world, which are supposed to be for observing celestial bodies. According to the German archeologists, this ensemble of upright stones in Karahunj is assumed to have been mainly a necropolis from the Middle Bronze Age to the Iron Age because of the massive stone tombs found in this area.

Calculating the age of the stone circle by a number of researchers, purely based on the position of stars in the sky in earlier times was concluded, that Karahunj is 7.5 thousand years old. Scientists think that these monoliths are 3500 years older than England’s Stonehenge and were built 3000 years before the Egyptian pyramids.

Karahunj describes as prehistoric settlement, fortification, ancient cemetery. The existence of the dated astronomical observatory continues to be disputable. Though a number of facts prove it. The dispute over Stonehenge between the archaeologists and astronomers lasted about 70 years and ended with the astronomers’ victory. The time will show how ends the dispute over Karahunj.

The tour to this marvelous construction of vertical megaliths will raise some questions and mysterious feelings.

Moreover, after the tour to Karahunj, it is worth to travel to Stonehenge in England, Carnac in France and Almendres Cromlech in Portugal or vice versa.