Take a journey to Stepantsminda and have the opportunity of discovering a picturesque settlement, nestled in the high mountains of Georgia, in the center of Kazbegi Region, which is about 165 km north to Tbilisi. It is located in the central part of the Greater Caucasus, at the foot of Kazbegi Mountain, at an altitude of 1744 m. It is considered as a recreation area and one of the most popular mountain destinations in the country. The Georgian Military Road, which connects Georgia with Russia, passes through this village. 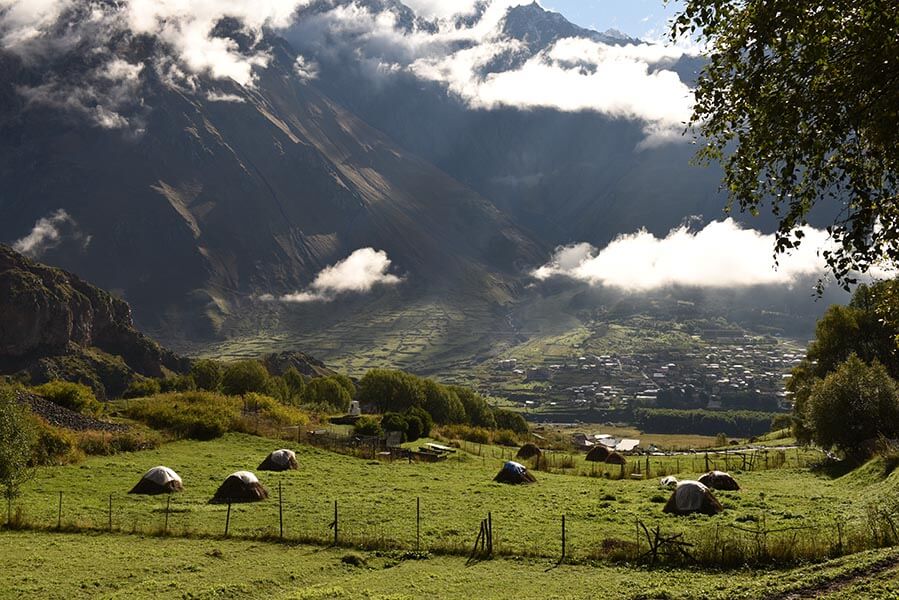 A trip to Stepantsminda is associated with unique and memorable meetings all along with unforgettable experiences. It is also one of the most remarkable places for nature lovers. Mount Kazbek, with its 5047 meters, is one of the highest and the most majestic peaks not only in Georgia, but also in the Caucasus. All the visitors always become enchanted by the great landscapes covered with coniferous and deciduous forests, as well as the fascinating view of dormant Kazbegi Volcano. According to the ancient mythology, Prometheus was chained on the icy slopes of Kazbegi. He was supposed to be imprisoned in the cave, which later served as a shelter for orthodox monks and contained many sacred relics.

During the tour to Kazbegi, you will have a chance to explore the stunning nature starting from the alpine meadows on the lower slopes of the mountain to the glaciers on the upper ones. Together with his snow-capped summit, the mountain presents himself as a guardian of the region. It doesn’t matter where you hike, he will be there like a lighthouse to show you an idyllic life under his power.

Stepantsminda is a place where humanity is in full harmony with nature, as it is a real paradise for hikers. The hiking in the mountains will gift you a deep knowledge of the local people and their hospitality while communicating with them. Besides, you will explore all the hidden beauties of this marvelous site. Thus, you are promised with a guaranteed adventurous tour through the corners of the naturally rich mountainous region.

At an altitude of 3675m, above Stepantsminda, the picturesque Gergeti Trinity Church is located, also known as “Gergeti Sameba” Church. Perched high on the mountain, the Georgian Orthodox church complex acts as a place of pilgrimages. You need to walk the entire hill by foot if you wish to be blessed. Gergeti Sameba is an iconic symbol of Georgia and one of the most sacred churches in the country, situated at the bottom of the Kazbegi Mountain Peak. The exact date of building this church and the adjacent structures is not certain, however, the construction was probably held in the 14th-15th centuries. The name “Gergeti” derives from the disappeared Georgian village Gergeti. The facade of the church's dome and the walls of the bell house are decorated with Georgian ornaments.

The tour to the mountainous village reveals the wonders of the world, which is embraced by stunning nature, best hiking trails, fast-flowing, crystal clear waters and steeply waterfalls, far away from the popular touristic paths and the urban hectic life. Besides, you will be accompanied by our professional guide in order to have extraordinary discoveries.

The visit to Stepantsminda will reward you a colorful new life. Hiking, exploring the hidden places, breathing the fresh air of the mountains are the main sources of unusual relief feeling, and these are the advantages of the tour to this mountain land.