Khor Virap Monastery stands on a small hill surrounded by green pasture lands and vineyards in the Ararat plain, in the South of Artashat City, Ararat Region. This sacred place is a prominent tourism destination in Armenia. This fortified monastery is a pilgrimage place and the holy site for the Armenian Apostolic Church. 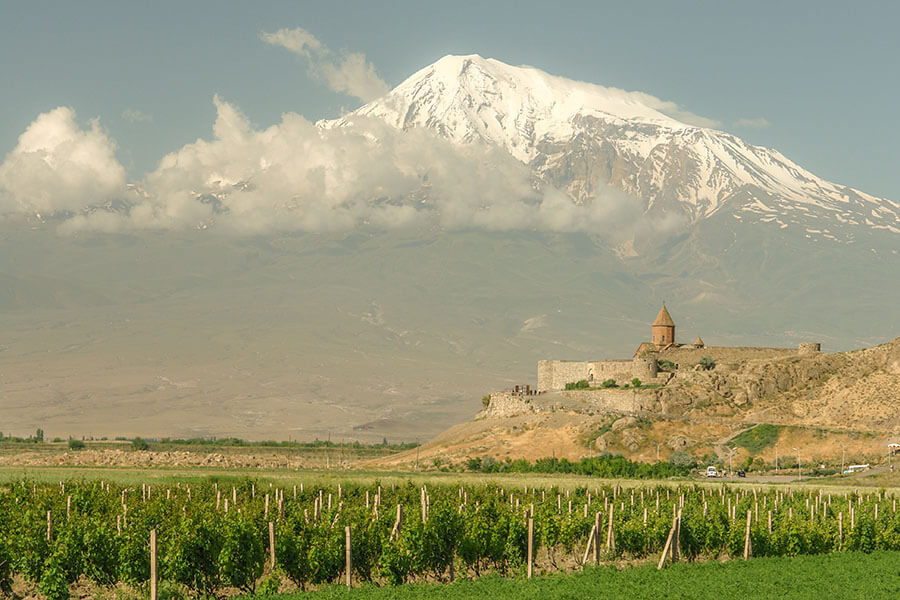 The tour to Khor Virap is so significant for its strategic location which overlooks the most famous symbol for Armenians – Mount Ararat, a spectacular scenery to be admired. The snowcapped summits of the mountain have magnificent outlook especially in a clear weather that attracts both locals and the foreigners. A travel to this monastery complex is an important landmark during the tour to Armenia as it is located 8 km away from the legendary mountain.

The Khor Virap Monastery has a very valuable historical background. Whereas, the name “Khor Virap” translates to “deep pit”. Until the chapel was built, it was used as a royal prison. Before the Armenians’ adoption of Christianity, between the late 3rd and early 4th centuries, Saint Gregory the Illuminator was giving sermons to preaching the Christianity, despite the prosecutions of King Trdat III. According to Armenian historians, the king had imprisoned St. Gregory in the deep pit surrounded by snakes, scorpions and other poisonous insects. However, he survived for 13 years by being secretly fed by a local Christian woman. After the illness of King Trdat III, Tiridates's sister, Khosrovidhukt, repeatedly had a vision that her brother will be miraculously cured by St. Gregory. Hence, the king liberated the saint from captivity and converted to Christianity.

Thereafter, Armenia became the first officially Christian state in the world, in 301 AD, and St. Gregory - the first Catholicos of the Armenian Apostolic Church. The pit became a holy place which is located under the main altar of the St. Grigor Church.

Nowadays, it is possible to access to the pit where Saint Gregory the Illuminator was kept and tormented. The entrance hole leads 6.5m down to the surprisingly large underground chamber by a long metal ladder with 27 steps. The first 2m of descending is very narrow, after which the hole widens. It can be stuffy there because there is a lack of air circulation combined with the number of burning candles.

At first, a simple chapel was built above the sacred place, while the whole monastic complex was completed later. The buildings have been repeatedly rebuilt since the 6th century. There is a carving of St Gregory while curing King Trdat of his disease, high on the eastern facade of the main Surp Astvatsatsin Church dedicated to the Mother of God.

The monastery has been hosting the theological seminary and the residence of Armenian Catholicos. In the thirteenth century, it was a very important religious and cultural center with a scriptorium. More than a dozen manuscripts were found there, which are well-preserved in Matenadaran - the repository of ancient manuscripts in Yerevan.

The journey to Khor Virap doesn’t take long as it is located not far from Yerevan - the capital of Armenia (30 km to the South). If the tour is organized at the appropriate time, it is also possible to attend the regular services, which are usually held in this church. Thus, do not miss a visit to this historical masterpiece!