Noravank Monastery is an admiring church in Armenia, which also means “New Monastery’’ in Armenian. It is located in a gorge of Amaghu River, near Yeghegnadzor Town, in Vayots Dzor Region. This marvelous site is among the famous tourist destinations in Armenia. 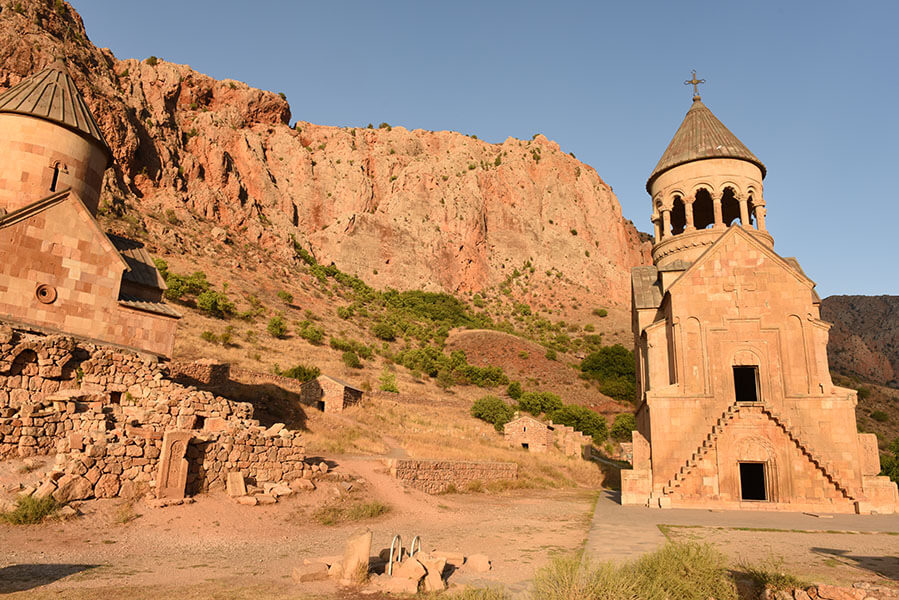 A tour to Noravank is remarkable for its unique architecture, historical significance and natural setting.
The whole area is fortified by a wall, and the monastery complex consists of two churches, a “Gavit” - an entrance to the church, a chapel and many khachkars (Cross-Stones).

The main church is Surb Astvatsatsin - the "Holy Mother of God". It is also called "Burtelashen" in honor of its financier, the Prince Burtel Orbelian. This is the most magnificent part of the monastery, as it is decorated very delicately. It is the masterpiece of the talented architect, sculptor and miniaturist Momik. The first floor of the two-storied building is half underground. The narrow stone stairs from the front side of the church play an important role in its decoration, as they lead to the second floor, which has a Cross form both inside and outside.

The oldest structure of the monastery is Surb Karapet Church, which was destroyed by an earthquake. Later, the main temple of the monastery was built by an order of Prince Liparit Orbelian. The temple is distinguished by its strict decorative ornamentation. There are deep niches with khachkars inside the church and cochineal red decorations on the ceiling. The cochineal red or Vordan Karmir plays an important role in the Armenian culture.

Surb Grigor chapel, with its restrained style of architecture, served as the tomb of Prince Smbat Orbelian, which was later added to the northern part of the main temple by the architect Siranes. The structure is surrounded by khachkars, and images of pigeons are carved on the walls of this ancient, spectacular temple.

There are some beautifully carved khachkars with exquisite patterns in the southern part of the old complex. The entire monastic complex includes masterpiece works of miniature painter Momik and his students. They are considered as the brilliant representatives of Armenian carving art of the medieval period. Momik's unique style was revolutionary at that time. He gently combined small details and traditional Armenian patterns with the style he borrowed from the near East.

The journey to this marvelous spot will grant you a splendid monastery, together with red-toned cliffs on the background.

The major part of the medieval monastic complex was mainly built in the 13th century by the financial contribution of the Orbelian family, the princes of Syunik. Noravank served as the residence of the princes and later bishops. It was a religious center of the historical Syunik Region. The monastery was also one of the most powerful and influential political and cultural centers of medieval Armenia.
The most parts of the monastery complex were damaged by an earthquake in the 19th century.

During the Soviet time, some reconstruction works were done along with archeological excavations, but the entire complex of Noravank was renovated and finally restored in 2001.
In 2002, the monastery complex was included into the list of the UNESCO World Heritage Site.

This ancient oasis, which is located in the Gorge of Amaghu will surely become an incredible experience for those, who search for culture, ancient architecture and breathtaking views of the picturesque cliffs and mountains.