In the East part of Armenia, in Geghama Mountains, is the “Blue Pearl” of Armenia, that opens its doors to the guests from worldwide. Lake Sevan is one of the most precious tourism destinations throughout the country. The stunning landscapes and cool water are excellent attributes for beach holidays in landlocked Armenia. The lake’s turquoise water attracts thousands of Armenians and foreigners to go swimming and sunbathe on the black or white sandy beaches. Any trip to Armenia is incomplete without a journey to the marvelous Sevan. 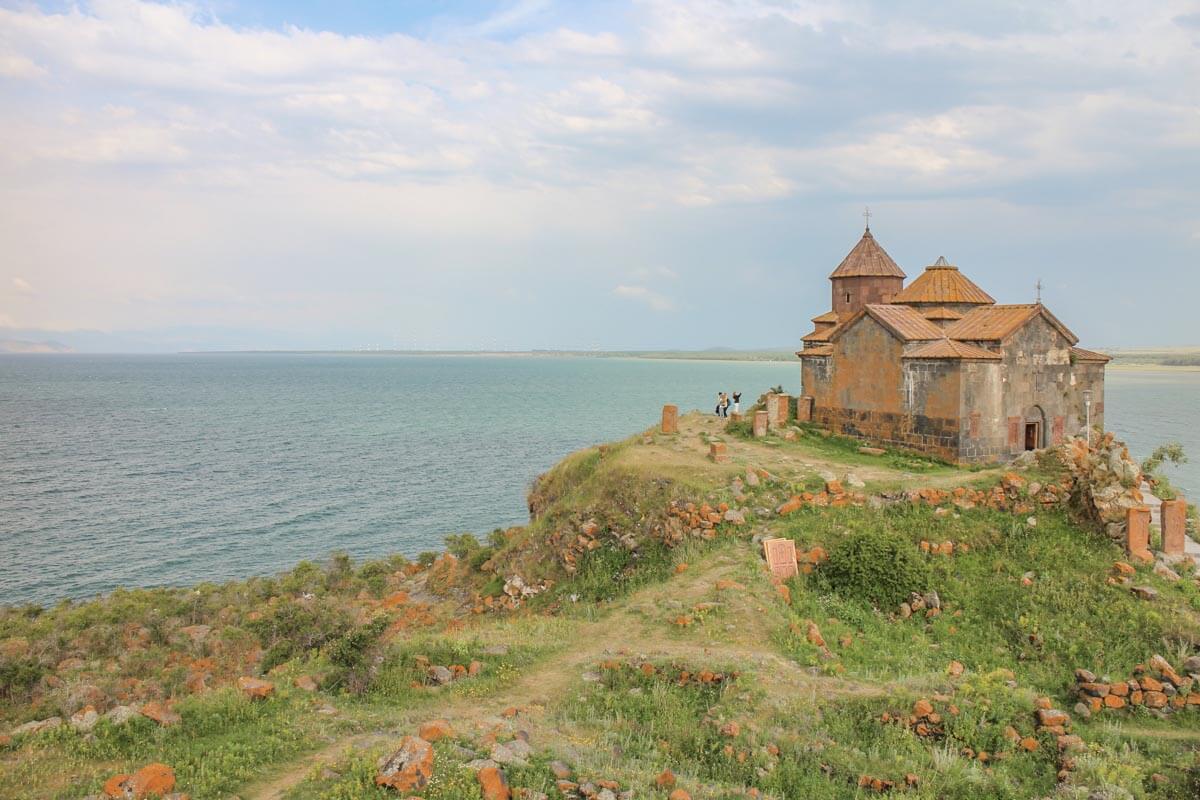 The tour to Sevan is full of entertainment and recreation. Apart from enjoying the sandy beaches along the shore, or experiencing water-based activities, there is a possibility of hiking to the nearby mountains. It will provide an incredibly charming scenery as by ascending the nearby mountains one will admire the majestic views from a completely different angle. The blue queen will appear with unpredictable moods. Depending on the weather, the amazing lake can change its shades from a perfect azure to dark blue, or emerald green, on rainy days.

Situated at an altitude of 1900 m above sea level, Sevan is one of the largest freshwater lakes in the world. This sweet water reservoir is fed by 28 rivers and streams from the surrounding mountains. For several decades, the water of Lake Sevan has been extensively used both for irrigation and the development of hydropower plant in Armenia. As a result, the water level decreased by about 20 m from its original natural state. It caused damages to the ecosystem and made the Sevan Island a peninsula. Arpa-Sevan and Vorotan-Arpa tunnels were built, in order to raise the water level. Since 2002, the new strategy to strictly control the amount of water taken from the lake raised its water level for about 3.5 m. As the natural eco-balance still continues to be unstable, the lives of endemic species, such as Sevan trout, the Armenian leopard or the mouflon are endangered.

Sevan tour offers another opportunity to reveal precious medieval monuments. As Sevanavank Monastery stands on the peninsula and can be accessed by hiking the stairs. Now, the monastic complex consists of Surb Arakelots “Holy Apostles” and Surb Astvatsatsin “Holy Mother of God” churches. The former island, which has been turned into a peninsula now, was a religious center even centuries before the construction of Sevanavank Monastery churches. The first monastery from the time of Gregory the Illuminator was destroyed during the Arab invasion. The original monastery complex, consisting of three churches, was built by Princess Mariam Bagratuni - the daughter of Armenian Bagratid King Ashot I the Great. Buildings of the still standing monastery complex were erected in the post-Arab renaissance, from 871-874. Only these two very similar churches have been preserved from the former splendor. The architecture of both churches is almost the same. They are made of Black Tuff (Armenian stone) in the form of a cross. There are many unique khachkars (Cross Stones) preserved in the area of the monastery. These khachkars differ as they are carved on the stones which have light greenish coloring. While exploring the surrounding area, one can hike the trail behind the monastery. Besides, Sevanavank provides glorious views of the magnificent lake.

Undoubtedly, any visitor will return from the trip to Sevan with fulfilled curiosity and complete satisfaction.