Tatev Monastery is one of the most spectacular tourist destinations in Armenia. During your trip to Tatev, you will be offered a unique opportunity to admire the masterpiece of medieval architecture, as well as to immerse yourself in the fabulous nature of the Syunik Region. 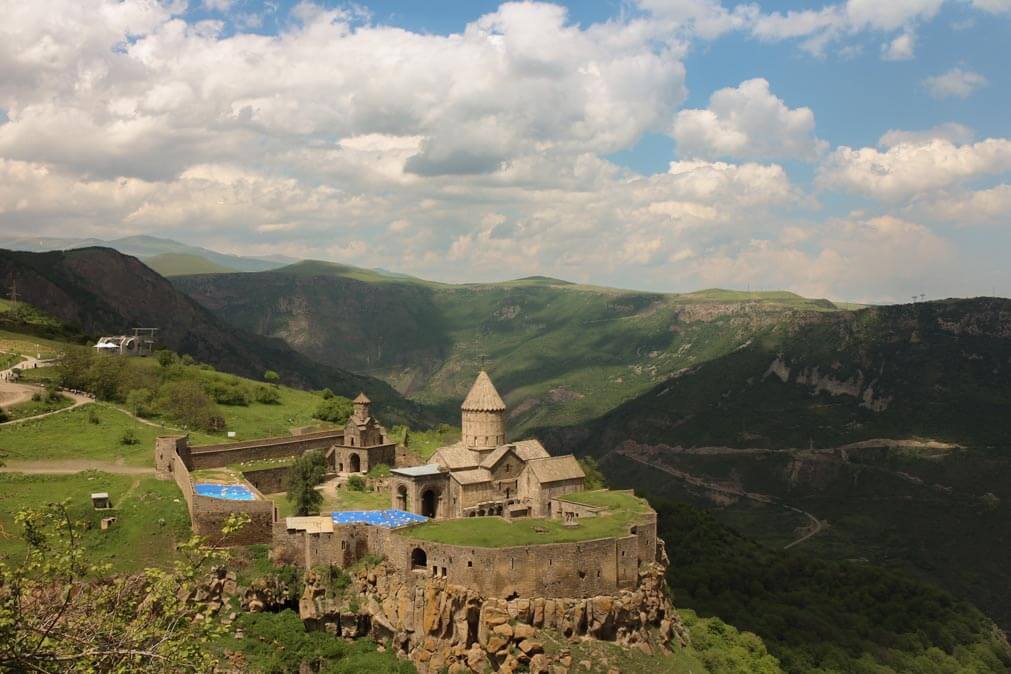 Located on a large basalt plateau, the monastic complex blends harmoniously with the magnificent landscape and gorgeous mountains that embrace the spectacular ancient structure.

There are some versions, about the originality of this monastery's meaning: According to one of them that Eustatius, a disciple of the holy apostle Thaddeus preached Christianity in this region and was killed for this reason in the Syunik Region. Thus, the monastery was named after him. The other version is connected to the construction of the main church. There is a legend says that one of the apprentices tried to place the cross on the top of the church and suddenly lost his balance and fell into the deep gorge. At that moment he shouted: "Togh Astvats indz ta tev", which means "May God give me wings".

The trip to Tatev is possible either by car or through the air. On 2010, the "Wings of Tatev'' - the reversible cable car from Halidzor Village to Tatev has been opened. The ride across the Vorotan Valley takes 12 minutes and offers a breathtaking bird's eye view all over the gorge. Besides, this aerial cable journey was inscribed in the Guinness World Records, as the world's longest, non-stop double-track cable car.

The impressiveness of this large fortified monastery is particularly shown from afar. It was built on a ledge as a defensive fort overlooking the Vorotan Gorge. The massive walls protect the monastery from the north and west sides. The monastery complex consists of three churches. Also, the huge complex includes a dining room, library, bell tower, mausoleum, and vaults. The Church of St. Paul and Peter is the oldest ones, the largest and well-preserved structure within the complex dedicated to the two apostles of Christ. The other two churches bear the names of St. Gregory the Illuminator and St. Mary - the Mother of God.

Over many centuries, the invasions and earthquakes caused considerable damages to the monastery complex. In the 10th century, before the modern seismograph was invented, the Armenian monks who lived in the Tatev Monastery built a pillar to anticipate the earthquakes. "Gavazan", which means the stick of the clergyman, has a rotatable base. The column swayed as the ground began to vibrate, which represents the uniqueness of the Armenian architecture and engineering.
The eight-meter monument made of small stones and a khachkar (Cross Stone) on the top is a special attraction of the monastery, although it no longer moves.

Tatev monastery was built between 9th-13th centuries replacing a pagan temple. It was one of the most famous spiritual, educational and scientific centers of the Middle Ages and served as the residence of the bishop of the Syunik Region.

Tatev is a powerful and influential monastic complex, with vast tracts of land and a large number of villages. It also played an important role in the development of science, art and in the preservation of thousands of valuable manuscripts from the 14th-15th centuries.
Tatev University was the main center for learning in Armenia. Besides, it contributed to the development of miniature painting and education.

In all, the trip to Tatev is full of unforgettable impressions and cultural experiences.