The Pearl of Caucasus

The pearl of Caucasus

Travel to Georgia, where the unforgettable impressions and sensations are guaranteed during the discovery of its unique and exceptional landscape. During this trip, you will cover many cultural monuments in order to get closer acquaintance with the Georgian ancient sites. Additionally, we will visit the most remote villages from Tbilisi while passing through wonderful semi-desert regions. Also, you will get to know the Georgian culture and the people’s hospitality. This journey will give you uncountable opportunities to get in touch with the local Georgian life, as well as, to enjoy the traditional tasty cuisine all along with the famous wine types of this country. 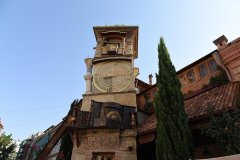 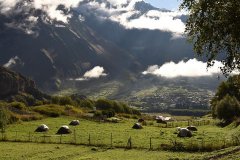 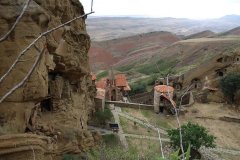 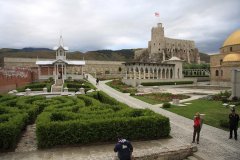 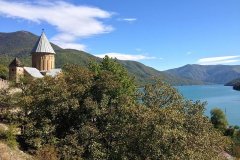 Day 2        Tbilisi City Tour
At 09:00 meeting with the guide in the lobby of the hotel.
This day will be dedicated to the discovery of the Georgian Capital - Tbilisi, particularly the "Old City". We will pass by the paved streets in order to see the houses with verandas and wooden balconies. The trip will continue to the next sightseeing, which is Metekhi Church - the former residence of Georgian kings. Afterwards, we will stroll through the Abanotubani district "Bath district", where lots of sulfur baths are situated. It will be the time to have some rest and enjoy a local tasty dish. Later, we will proceed on to the Narikala Fortress, which is one of the most ancient constructions in Tbilisi. Also, we will have a visit to Sioni Cathedral of the 5th – 6th centuries, as well as, the Anchiskhati Basilica of St. Mary Church, dating back to the 6th century.
Dinner at a local restaurant. Overnight in Tbilisi.

Day 3        Tbilisi - David Gareja – Tbilisi
In the morning, we will head to David Gareja, an ancient monastery complex. It comprises of 19 monasteries all along with beautiful caves, which are covered with ancient frescoes. We will take an enjoyable stroll, which will be followed by lunch at a unique cafe in a semi-empty village.
Late in the afternoon, we will arrive in Tbilisi. Dinner. Overnight at the hotel.

Day 4        Tbilisi – Jvari – Mtskheta – Ananuri – Kazbegi
Early in the morning, we will depart to Jvari Church, dating back to the 6th century. It is located on the top of a rocky mountain. Our trip will proceed to the ancient Capital of Mtskheta, a city-museum inscribed on UNESCO World Heritage List. Later, we will head to the north of the country, while passing through the landscapes of the Greater Caucasus. Also on the way, we will discover the unique architectural Ananuri Castle Complex, dating back to the 17th century. In the afternoon, we will arrive in Stepantsminda (former Kazbegi), from where a magnificent view on Mount Kazbek (Mqinvartsveri) unfolds, which is an extinct volcano on the height of 5047 m.
Check-in at the hotel, overnight.

Day 5        Kazbegi
The plan will be to enjoy a walking tour in Kazbegi. In the morning, we will pass through Gergeti Village in order to rise to Trinity Church of the 16th century. In case of a good weather, we will be rewarded with a magnificent view of Mount Kazbek. Later in the afternoon, we will discover Sno Village with its medieval watchtowers, dating back to the 16th century.
Leisure time. Overnight in Kazbegi.

Day 6       Kazbegi - Akhaltsikhe
After the breakfast, we will head to Akhaltsikhe with making some stops on the way. Upon arrival, we will have a rest while enjoying a delicious meal. Later, our discovery will start to the Old Town of Akhaltsikhe, also called Rabati, and its castle of the 12th century, which was entirely restored in 2012.
Dinner and overnight in Akhaltsikhe.

Day 7        Akhaltsikhe - Vardzia
In the morning, we will go ahead to Vardzia City of the 12th century founded by Queen Tamar. This city of caves is entirely dug in the basaltic rocks and consists of nearly 3000 caves, which can shelter thousands of people! Also, we will discover the cave church with its mural paintings, the pharmacy and the secret tunnels.
Dinner and overnight in Vardzia.

Day 8        Vardzia - Tbilisi
On our way to the Georgian Capital of Tbilisi, we will discover the Khertvisi Fortress of the 10th century. It is one of the finest examples of the military architecture. During this trip, we will be taken by the splendid view of the wild mountain landscapes. Furthermore, we will explore the great Lake Paravani, which is located at 2000 m. above sea level.
In the afternoon, we will arrive in Tbilisi. Check-in at the hotel, dinner and leisure time in the evening.
Preparations for departure.

Day 9      Return flight
Transfer to the airport. End of our services.